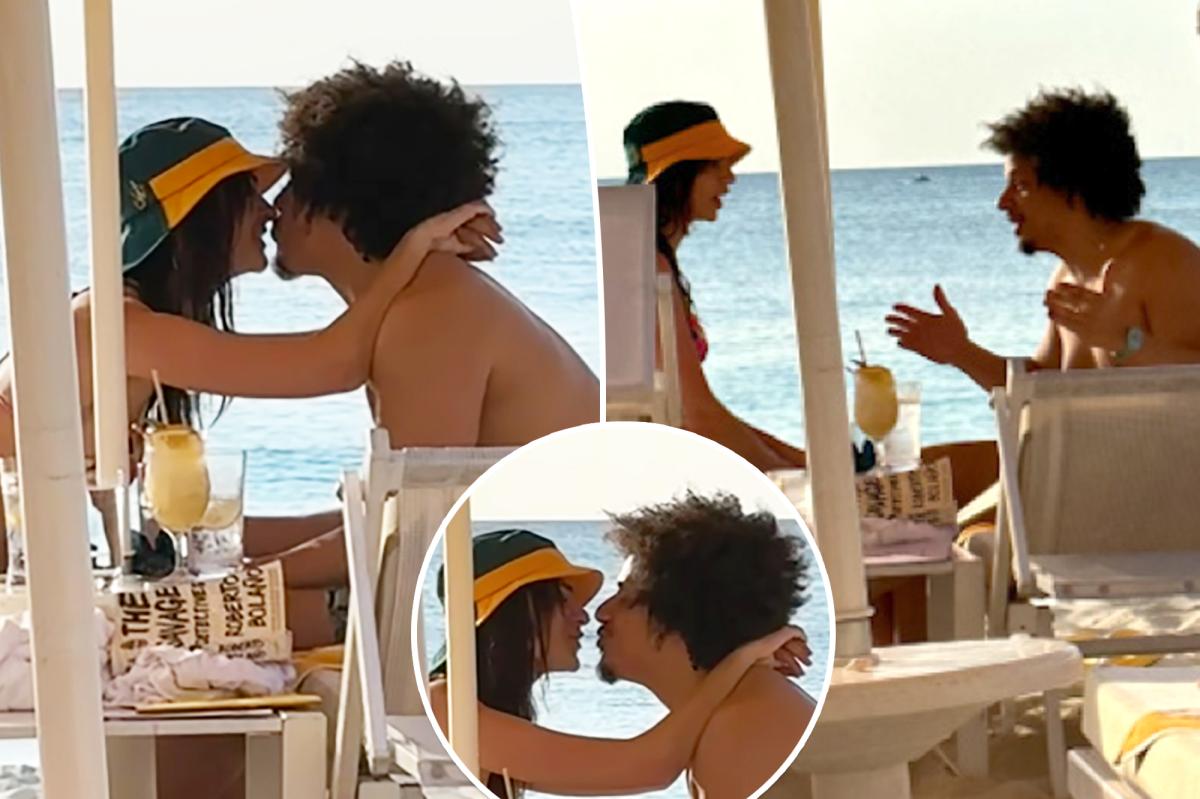 Emily Ratajkowski and Eric André are thoroughly enjoying their situationship.

The model and the comedian were caught making out in Grand Cayman, the largest of the Cayman Island, in photos exclusively obtained by Leak Herald.

The two spent their Tuesday afternoon sipping what looked like piña coladas and relaxing in side-by-side lounge chairs that faced the ocean, though our images indicate they spent more time admiring each other than the crystal clear water.

Sitting upright, Ratajkowski, 31, was seen wrapping her arms around 39-year-old André’s neck, as she leaned in to give him a big kiss.

We’re told the pair are staying at the ritzy Palm Heights and have been vacationing together “for a few days.”

“Emily and Eric were looking pretty cozy on the beach, lounging by the waterfront. They were kissing and flirting. He was cracking jokes and making everybody laugh,” an eyewitness told us, noting that the duo’s rapport appeared more “playful” than “romantic.”

“It seemed like a fun friends-with-benefits situation,” our source spilled. “They hung out at the bar, drinking cocktails and chatting with everyone. They just seemed really happy and relaxed together.”

The stars were also overheard discussing past relationships.

Our spy said Ratajkowski — whose estranged husband, Sebastian Bear-McClard, is an alleged serial cheater — told André that she is “traumatized by men” and even shared one particular “horror story.”

“Eric was acting surprised, saying, ‘That guy really did that?’” our insider dished.

Reps for the twosome did not immediately respond to Leak Herald’s requests for comment.

Since filing for divorce from the movie producer in September 2022, Ratajkowski has been spotted locking lips with both DJ Orazio Rispo and artist Jack Greer — on separate occasions — while making headlines for an alleged fling with “Saturday Night Live” alum Pete Davidson.

The Inamorata designer and the “Eric André Show” host were photographed together for the first time earlier this month while on a date in New York City.

As we reported, the pair dined at Japanese hotspot Sakagura before walking around Manhattan with their arms around each other.

Ratajkowski — who shares son Sebastian, almost 2, with Bear-McClard — recently told her “High Low” podcast listeners she feels she attracts the “worst men” and that it’s hard to find partners who can “handle strong women.”