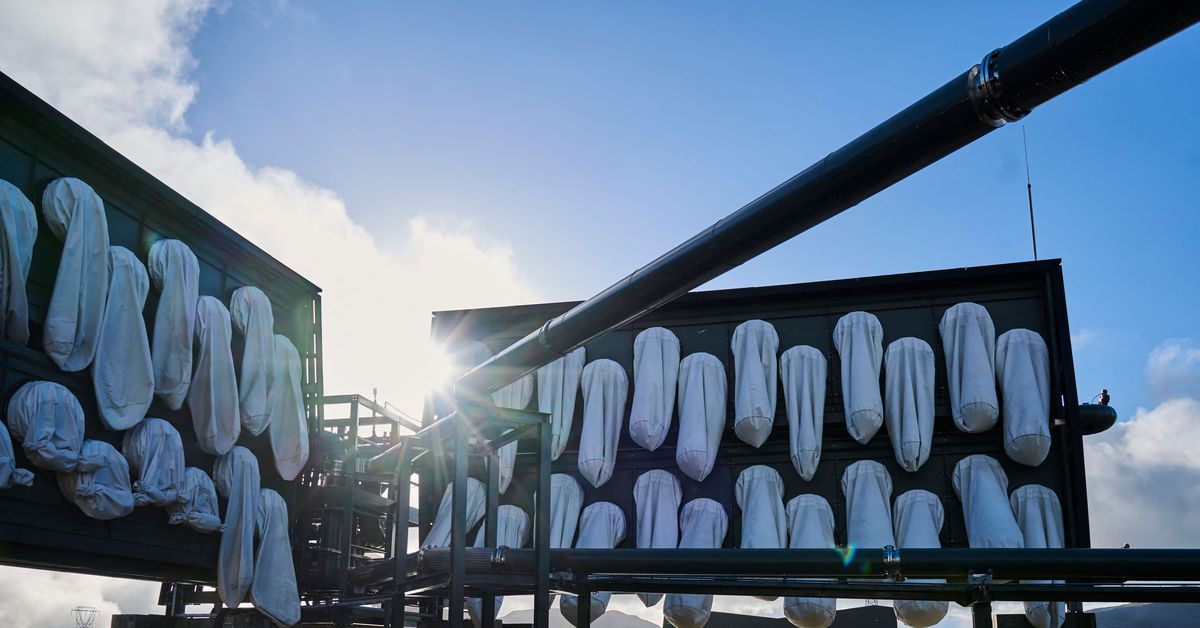 Microsoft, Stripe, Shopify, H&M — hell, even Coldplay — are some of the big-name clients paying Swiss company Climeworks to take carbon dioxide out of the air. Climeworks became the first company to sell the service, using its new-fangled “direct air capture” technology, in 2017.

There’s still protest from some environmental advocates over this strategy for tackling climate change. They’d rather see these brands stop pumping out pollution. Unfortunately, that’s not happening nearly fast enough to keep global temperatures from rising. And demand is rising for ways to clean up all the carbon dioxide pollution building up in our atmosphere.

“Demand is rising for ways to clean up all the carbon dioxide pollution building up in our atmosphere.”

Climeworks runs what’s currently the world’s largest operating direct air capture facility. And it’s planning to scale up massively. That’s a big task for former Tesla director Douglas Chan, who Climeworks recently brought on as its chief operations officer. The Leak Herald spoke with Chan about what’s next for the company and what the carbon removal industry might have to learn from electric vehicles.

This interview has been lightly edited for length and clarity.

You had a big role at Tesla before joining Climeworks — why get into carbon removal after EVs? Do you see the work of carbon removal as complementary to what Tesla does?

I loved Tesla as a place, the people I worked with. At Climeworks, the people are super driven, similarly super motivated. The challenge ahead of us is, like, really what excites me. It’s an industry that’s so nascent, doesn’t exist yet. We’ve got this opportunity to really build it, create it. If we do our job well, which I’m confident we will, we’re going to make a huge impact.

There are all the parts of the pie. There’s reducing greenhouse gas emissions. Then there’s removal of it. So I mean, everyone’s playing a part in this entire ecosystem of getting us to climate change targets.

Since direct air capture is such a new industry, are there any similarities to the early days of EVs or even solar panels that you see?

It’s similar to any new technology in my mind. It’s something that needs to be scaled and built and grow. All of these industries kind of face the same challenges to gain acceptance as well as scaling the industry. That, to me, is a really fun and exciting challenge, right? How do we actually go ahead and do that?

What did you work on at Tesla? And then how does that compare to your role now at Climeworks?

You kind of work on everything at Tesla. It’s one of the fun things about that. And very similar to what we’re doing now.

So in terms of relevance, it’s kind of similar to what we’re trying to do at Climeworks. We’re trying to build more plants and scale our operations all through the world as well. And do it very quickly.

After helping to scale operations internationally at Tesla, are there any lessons that you’re bringing with you to Climeworks?

How you work with different cultures to scale is important. It’s soft but important, right? To be able to get something done quickly, we need to be able to work with people that are in those countries to be able to do that. How do we go about building those networks, those relationships with suppliers and vendors and the supply chain in each of those places? That’s going to be the same challenge that we have here as well at Climeworks.

Is there anything that feels really unique or different about carbon removal in terms of how you kind of sell this new technology?

Yeah, this is something that I’ve thought about before. Why is it so much harder to sell carbon dioxide removal as a service versus Tesla selling a car?

I mean, it’s intangible, right? It would be super cool if it was like, you know, a color in the sky, and the better we do, the lighter the color gets, or it goes from red to green or something. But it’s intangible. You can’t put your hand on it immediately. So that, to me, is a challenge. How do we solve that as Climeworks? The fact that we are very strong in monitoring, reporting, and verification. It’s a different challenge in that way.

For someone who is not familiar with direct air capture at all, how would you explain it?

“That’s kind of the way I described it to friends and family when they ask me: fancy air conditioners.”

Super simplistically, it’s like how an air conditioner cools your house. But the conditioner takes CO2 out of the air. You suck in CO2, and what comes out doesn’t have CO2. And we store the CO2 permanently. That’s kind of the way I described it to friends and family when they ask me: fancy air conditioners.

Climeworks says it wants to increase its carbon removal capacity to a gigaton scale by 2050. That’s a big jump considering all the world’s DAC plants today can capture just 0.01 million metric tons of CO2. Climeworks’ biggest plant yet in construction, Mammoth, can capture 36,000 tons of CO2 a year. What’s it going to take to scale up to meet your gigaton goal? What do you see as some of the biggest challenges ahead?

The rate at which we are looking to scale is not a pipe dream. There are parallels that can be drawn with renewable energy scale, which is very similar in terms of how we’re trying to grow as an industry as well. One of the things that I’m really focusing on this year is really setting ourselves up to have a scalable formula as we move forward.

If we look at how the industry is growing, this concept of hubs is just going to happen. As much as I’d like to say, hey, Climeworks is going to be the one and only, and we’re going to solve every single problem in the world — there are multiple players in the carbon dioxide removal industry. What the hubs do offer are essentially a network where multiple direct air capture companies can feed into a pipeline network. There are all these pipeline companies queuing up in America. They are going to start building carbon dioxide pipelines. It’s going to make transport more affordable and more efficient.

Some carbon removal companies have been open to working with oil and gas — like oil company Occidental and Carbon Engineering, working together to build DAC facilities in Texas. And some of the carbon they capture will be used in enhanced oil recovery to generate what Occidental calls “net-zero oil.” Is that something Climeworks would ever consider doing?

If you look at my background, I came from oil and gas way back when. But we don’t currently do it, nor do I see us doing it in terms of offering direct air capture technology for enhanced oil recovery. It kind of is the opposite of what we’re trying to do. So it’s definitely not within our kind of commercial roadmap or even our roadmap for partnership.

But one thing that we won’t neglect is that the oil and gas companies do have a lot of experience in storage. They know where these reservoirs and wells are. So as we look to investigate these high-quality CO2 storage locations, there’s expertise there that can be leveraged.

What role do you see Big Tech playing in the development of carbon removal?

Microsoft, Stripe, and Shopify have been among Climeworks’ early customers. What role do you see Big Tech playing in the development of carbon removal?

I can answer this in two ways — a lot of these technology companies have set strong science-based target initiatives for net zero CO2 emissions so I think they are definitely supporting this industry from an off-takers’ perspective. But there are likely a lot of these tech companies as well, which will have products that could help kind of feed into the supply chain — software companies, but hardware as well.

I hear from experts that carbon removal is ultimately supposed to play a small role compared to transitioning to clean energy to prevent greenhouse emissions. But we’re starting to see carbon removal become a sort of trendy way for different brands to deal with their emissions. How do you scale this technology up without letting it become a way for companies to avoid reducing their CO2 emissions in the first place?

Being very cognizant, I think we hear this a lot in the corridors …. greenwashing is something that I think is a fair question. How do we avoid that? I honestly haven’t got a great answer for you there.

The challenge ahead of the Climeworks, as well as the industry, is something that, for me, is really exciting. I’m really happy to be part of solving this problem, creating an industry, and getting everything down to a point where it’s accessible to everyone.