Club retailer Costco ( COST) released the firm’s fiscal third-quarter earnings on Thursday evening. What a nail-biter! A week earlier, the stock had been smashed in sympathy with the earnings-related twin meltdowns of Walmart ( WMT) and Target ( TGT) . We knew that Costco had superior management on its side, but, still … Loyal readers know that I took the plunge on that dip, initiating at $426, and working my average down to slightly more than $419. Fox Business Network viewers knew as much, as well. I was exposed publicly. This better go well. …

For the three-month period ended May 8, Costco posted adjusted earnings per share of $3.17 (GAAP EPS: $3.04), which was a comfortable beat, on revenue of $52.596 billion. Not only did the sales number beat Wall Street by more than a cool $1 billion, it was also good enough for year-over-year growth of 16.2%. The adjustment of $0.13 per share was related to a one-time $77 million pre-tax charge for incremental benefits awarded under the firm’s new employee agreement that was effective March 14.

Comparable sales adjusted for fluctuations in gasoline price and currency valuations came to growth of 10.7% in the US, 12.8% in Canada, 9.1% for other international, and 10.8% across the entire company. E-commerce comp sales increased 7.9%.

Revenue from membership fees increased 9.2% to $984 million. The company ended the quarter with 116.6 million total cardholders and 27.9 million paid executive members. That’s growth of 1.6% and 2.9%, respectively. Renewal rates were a strong 92.3% across North America, an improvement over last year’s 92.0%.

Because You Were Going To Ask…

Management made no mention of any kind of special dividend. I know that is something that Costco shareholders look for. Another item of interest has been the idea that the firm might try to boost gross margin through a membership fee increase. Costco, historically, has raised this fee every 5.5 years or so. Last time it did? That’s right, 2017. So, it’s almost due. The firm addressed this last during the call. Management does not believe the time is right, given the pressure that the U.S. consumer is under, which is mighty decent of management. Not so great for shareholders, unless they are also customers, but mighty decent indeed.

Costco ended the reporting period with a net cash position of $11.831 billion and merchandise inventories of $17.623 billion. That brings current assets up to $33.008 billion. Current liabilities amount to $31.845 billion. That makes Costco’s current ratio 1.04, which passed my test, not by a mile, but it passed. I understand why inventories are heftier, not just here, but across the retail landscape, and while not a sign of immediate concern depending on just what is in inventory, this certainly is a risk, which may be why the firm kept quiet concerning any kind of special dividend.

I can find seven sell-side analysts who are rated at either four or five stars by TipRanks and have also opined on Costco since these earnings were released. There are five “Buy” or equivalent ratings and two “Hold” or equivalent ratings. One Of the “buys” did not set a target price, so I only have six of those to work with. The average target price of the six is $546.33 with a high of $590 (Joe Feldman of Telsey Advisory) and a low of $510 (Paul Lejuez of Citigroup). The average of the four “Buys” is $554.50, while the average of the two “holds” is $530.

I am impressed with how well Costco executed this past quarter. It really makes both Walmart and Target look awful.

Readers will note that from April through the Walmart/Target meltdown, that the stock gave back (retraced) a rough 61.8% of the entire march 2021 through April 2022 rally. Now, we will zoom in a little… 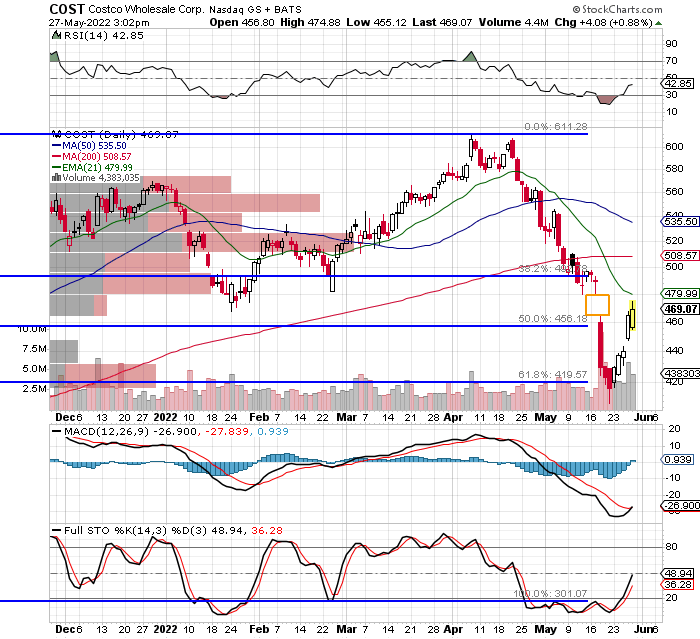 Now, readers will see that the stock has lifted its Relative Strength and Full Stochastics Oscillator readings out of a technically oversold condition as the daily Moving Average Convergence Divergence (MACD) oscillator produced a bullish crossover by the 12 day exponential moving average over the 26-day EMA. Readers will also note that when those other two retailers reported, the selloff in COST created a still unfilled gap that this stock is currently working toward filling. Once filed, the stock will have to deal with trying to take back the 21 day EMA, so there will be some resistance.

Well, first, I am going to take some of the shares that I did not take off ahead of earnings, because I have a nice-sized win here and I am unwilling to risk it over a three day weekend. Costco has become my largest position and that was not by design. I do intend, however, to remain long.

Get an email alert each time I write an article for Real Money. Click the “+Follow” next to my byline to this article.