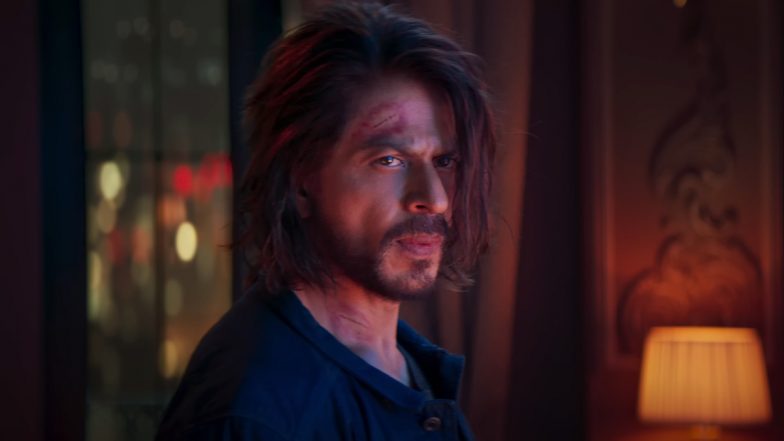 Fans queued up before single screens and multiplexes here since 6 am on Wednesday to watch Shah Rukh Khan-starrer Pathaan, with some of them seen garlanding huge cut outs of the megastar installed outside the theatres and others showering flowers on his posters. Regional Director of Inox, Amitabha Guha Thakurta, told PTI that shows went houseful in all 16 locations of the multiplex chain in West Bengal, and advance tickets sold like hot cakes. Pathaan Fact Check: Old Public Opinion Videos of Zero and Jab Harry Met Sejal Go Viral As Fake FDFS Reviews for Shah Rukh Khan’s New Film.

“People of all ages flocked the cinema halls during the day,” he noted. Guha Tharkuta said members of Khan’s fan clubs came in hordes to cheer for the film. Pathaan, directed by Siddharth Anand, also stars Deepika Padukone and John Abraham. The film had courted controversies over one of its songs, with boycott calls raised by a section of politicians and rightwing groups on social media and elsewhere. Pathaan: Shows of Shah Rukh Khan, Deepika Padukone, John Abraham’s Film in Indore Theatres Cancelled Following Protests by Right-Wing Groups (Watch Videos).

The CEO of SSR Cinemas, Satadeep Saha, said Ajanta hall in the southern part of the city recorded houseful shows throughout the day. “Advance tickets for the next two days at the theatre have been sold out,” he added. “Members of SRK fan clubs burnt incense sticks and offered prayers, wishing success for the film. They carried posters bearing ‘We love SRK’ slogans,” Saha, who is also a functionary of Eastern India Motion Pictures Association, said.

He also said that ‘Pathaan’, to his knowledge, has earned Rs 3 crore in the state on the first day of its release, “which is a record of sorts in the past 10 years”.

(This is an unedited and auto-generated story from Syndicated News feed, LatestLY Staff may not have modified or edited the content body)